Loose Him and Let Him Go

Spreading the Gospel, 'Bit by Bit'

I ran across this today and found it rather thought provoking.

Gleanings from the diary of Ruth Bryan

While thinking this afternoon of some friends who have been running eagerly from one place to another after a celebrated, and, I suppose, most interesting preacher–this idea forcibly struck me: Why manifest such undue concern after streams, when we have the Fountain always accessible? I can, in my humble cottage, approach the footstool of the Father of mercies, and enjoy the manifestation of His love!

“My people have committed a double evil: They have abandoned Me, the fountain of living water, and dug cisterns for themselves–cracked cisterns that cannot hold water!” Jeremiah 2:13

I honestly don’t know if that verse was what she noted or if it was added by the author of the email-devotional I read. (The link to the text is included in the title of the piece if you’d like to look at it in depth.)

I do know that what she is essentially saying, how we put so much emphasis on man and his presentation over the fact we can go to the source at will, is absolutely true and utterly amazing to me. As has been well said, “The more I learn about how amazing grace is the more amazing grace truly is!” And I’ll add this verse myself, as today’s daily verse.

Hebrews 4:16 “Let us then with confidence draw near to the throne of grace, that we may receive mercy and find grace to help in time of need.”

For by grace you have been saved through faith. And this is not your own doing; it is the gift of God, not a result of works, so that no one may boast. For we are his workmanship, created in Christ Jesus for good works, which God prepared beforehand, that we should walk in them. (‭Ephesians‬ ‭2‬:‭8-10‬ ESV)

God saved you by his grace when you believed. And you can’t take credit for this; it is a gift from God. Salvation is not a reward for the good things we have done, so none of us can boast about it. For we are God’s masterpiece. He has created us anew in Christ Jesus, so we can do the good things he planned for us long ago. (Ephesians 2:8-10 NLT)

And the Word became flesh and dwelt among us, and we have seen his glory, glory as of the only Son from the Father, full of grace and truth. For from his fullness we have all received, grace upon grace. For the law was given through Moses; grace and truth came through Jesus Christ. (John 1:14, 16, 17 ESV) 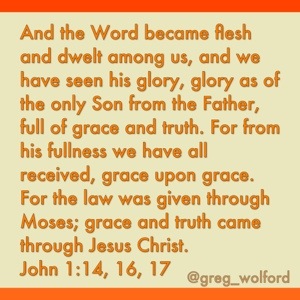 I found this unattributed piece on the Internet this evening. In today’s society I fear that many are like the thief in this story, looking to skate by until the next time. How sad each of us should be that there are folks that just don’t understand the scope of not only God’s grace, mercy, and love, but also His hate toward sin and the judgement to come.

The Meaning of Forgiveness
“How sharper than a serpent’s tooth it is to have a thankless child,” says William Shakespeare’s King Lear. Well, then, how about a thankless jailbird? If you want an answer to that one, ask District Judge Phillip Killien of Seattle. Recently, a young man appeared before Judge Killien on charges of car theft. The judge saw no reason to keep him locked up while he awaited court action. He released him on his own recognizance. A short time later, Killien’s own car disappeared. Police quickly found the stolen car, and the one who stole it. Then, Judge Killien was in court in a new role, not as a judge, but as a witness, against the same young man he had released, who stood accused of stealing the magistrate’s wheels. A Japanese proverb reminds us that forgiving the unrepentant is like drawing pictures on the water. Ignoring sin may gain the sinner’s temporary gratitude, but makes no lasting impression. A forgiven car thief is still a car thief if no change of character takes place. How about you? Do you seek to escape justice or to be justified by God’s grace and Christ’s mercy? God offers you liberty, not license, in the cleansing blood of Christ.

The sacrifice you desire is a broken spirit.
You will not reject a broken and repentant heart, O God. (Psalm 51:17 NLT)

I read a quote today from Albert Einstein: “If you can’t explain it simply, then you don’t understand it well enough”. This stirred up my mind about salvation and the things of God. It seems to me that all too often we make these subjects way more complicated than they really are.

I’m thankful that one needn’t be a scholar to understand God’s Word or His plan of salvation. I’m thankful that there is nothing that I can do to make myself good enough in God’s sight. I’m thankful that He takes the broken, the low, the heavy burdened and makes them in to a new creature in Christ Jesus. I’m thankful that Jesus did every thing, completely, that needed to be done so that we can be brought back into a right relationship with the Father. I’m thankful that it only takes our faith and belief to be a part of the family of God under the wonderful covenant of Grace. I’m thankful for all this because otherwise I would be staring into an eternity of what I justly deserve, not what has been lovingly imparted to me.

I’m so very glad that it is so simple, by faith in Christ Jesus alone, that we can receive forgiveness and know we are His and He is ours.

The other day I received an email about the healthcare debate. The writer obviously disagrees with the whole idea saying:

“Let me get this straight: We’re going to be “gifted” with a health care plan we are forced to purchase and fined if we don’t?”

While healthcare or politics are not the subject of this email the author quoted above brings up one good point: If you have go pay for something it isn’t a gift.

In today’s verse Paul tells us that our salvation is a free gift. The Bible clearly teaches that we are saved by God’s grace, nothing of ourselves (Ephesians 2:8-9).

We cannot earn salvation; we don’t deserve it to begin with. We cannot pay for it; Christ Jesus has already done that. It is open to all who will receive it through and by Jesus. But we have to be open to the Gospel and receive the gift; there’s no other way (John 10:9; Acts 4:12).]

Everything Christian For Less!

All purchases from this link generates a donation for our church.

Loose Him and Let Him Go